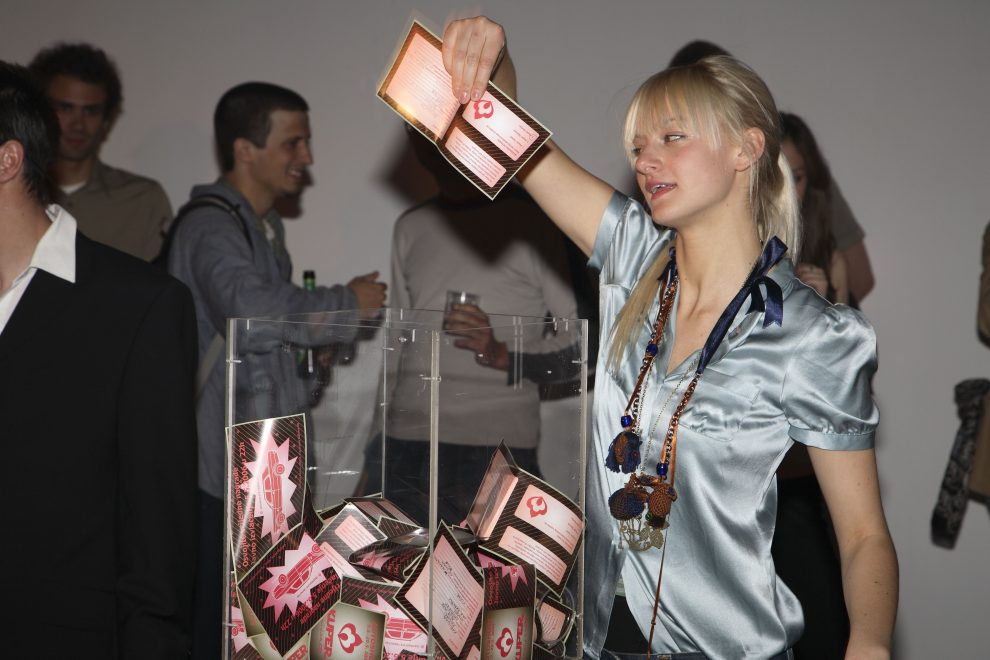 In the 18th century the concept of fetish referred to an object of adoration or supernatural powers among the primitive, as they were called, religions. At the end of the 19th century this sense of religious exaltation was resemanticised to cover sexual fixations, and fetishism began to mean a male sexual pattern in which a given inanimate object or indeed a part of the body became an object of arousal. In Freudian psychoanalytical theory it becomes a substitute for the mother’s want of a penis, by displacement from the mother-child-phallus sexual relation. The position of object of admiration or object of desire in the paradigms of the technological society can be ascribed to the cars. Ferrari, Lexus, Maybach, Lamborghini and Rolls-Royce are all objects that confer power, sex appeal and identity on subjects. Some theories say that identity is not actually a property of a person as such but is set up outside. The subject is formed vis-à-vis others and vis-à-vis its own self, marking its economic, social, class and family position with objects. By surrounding ourselves with object- signifiers, we establish an identity that is an alienating position.
Desire, unlike need, can never be satisfied, claims Lacanian psychoanalytic theory, according to which desire is an attitude towards absence and not object, it is the “desire for the desire of the Other”, and it is this that Nina Kurtela embodies as the fetishisation of means oftransportation in the project Car Show/Autoshow in the Croatian Artists Centre, HDLU. Cars qua status symbols represent their owner, and so the artistic car-objects of Nina Kurtela represent her as artist. Hence the title turns into a pun: the real exhibition of cars and the auto-show as a self- showing, a self-exhibition. At the opening, the host/compère unveiled to us the silhouette of an upmarket car in life size wrapped in silver silk, slowly turning on a metal stand.
Underneath the smooth silk, the upholstered shell of a real car in Neo- Pop Art aesthetics was revealed. In her painting and prints, this artist deals with the recycling of old materials, and in this case she has taken a diagrammatic floral ornament and uses it as a motif on her own paintings, as well as appliquéing it to the upholstery and glass, thus transforming a wreck of a car into a highly aestheticised objectification of painting, into a fancy designer’s object that generates the desire for possession. Nina Kurtela deprives the car of all functionality while turning it into a pointless object of desire that instead of lights has mirrors, and instead of the three-dimensional symbol on the bonnet has a glass on a base, filled with caviar. Caviar, another symbol of prestige and high society, is also part of the resounding name of the car itself, which as a whole goes: Cooper Caviar GTX.
Autoshow is not exhausted just in the star of the evening – the fetishised object under the spots. The whole project is also a happening. The performance features, which include the work of the compère of the show, responsible for the professional zip of the whole representation, the game show prizes like eating caviar with no hands, the stereotyped hostesses that make sure the visitors properly fill out their bingo cards (and pose sensually with the car), the waiters serving drinks, the TV cameras and the audience – in which there happened to be the stars of the domestic soap Forbidden Love Petra Kurtela (the artist’s sister) and Mario ValentiÊ – turned round together with the car in a glamour entertainment the ludic element of which in the end managed to be unpretentious. All of these characters by their active participation and interaction constituted Kurtela’s social installation.
Using to the uttermost the patterns and strategies of showbiz the artist creates a show in which she presents the construction of status via a large mechanical appendix to or accompaniment of someone’s physical body, which many people in this society have to pay off in five year easy payment plans, however much some of them are hard put to makeends meet. This caricatured simulation shot through with wit is nevertheless not a moralising pamphlet discussing what can be termed true worth as against something that is classified as a false value. By creating a complete replica of an autoshow at the centre of which is an emasculated and non- functioning car, the artist generates in a social situation a dualism, appropriately meting out the irony, at several levels at that, and then again leaving enough room for humour, fun, kidding about, easy enjoyment, jolliness and looking on the bright side, which all comes from accumulating and identifying with objects. According to the logic of consumerism, while the show is still on, the car can be bought at a discount price of 169,000 kuna, while after the show is over it will end up in the small ads.
Party mood in the literal sense of the word, processuality and a relational attitude to the audience were what characterised the previous work of Nina Kurtela in the Krizic Roban Gallery, where she sidestepped the unease of having her first solo show by putting on a birthday party. But in the monumental Barrel Gallery of the Mestrovic Pavilion, Nina Kurtela to a still greater extent turns art into adventure, into spectacle that ostensibly ducks out of contemplation and generates an apparently a no-hang-ups social situation, however much below it all there is a carefully considered script. A project that is so financially and organisationally demanding, and which is also actually the dissertation of young Nina Kurtela, is with its ambition, high level of production, cogency and articulateness a phenomenon in the generation to which it belongs.